A Mexican blue jay, a crow, and an unknown bird in the Santa Elena Canyon.

These are the three I remember most from our week in Big Bend National Park, a desert park where bird enthusiasts are rewarded at every turn.

As you all know by now, animals have a special place in our hearts, and along this quest we’ve encountered more than I could have imagined. Whenever an animal crosses a trail I always remember that place over others, as we’ve shown with a bighorn sheep in the badlands or deer in the Florida keys.

This time we’re honoring three winged creatures who pulled on our heart strings in the breathtaking lands of southwest Texas. And the trails we discovered them on are a few crown jewels of the enchanting Big Bend.

1. A Mexican blue jay on The Window Trail

The Window Trail began from the visitor center in Chisos Basin. A glorious sun warmed the air as we set off into what felt like a great embrace of mountains on either side of a valley.

A couple miles in and then I saw you.

You were bold and bright. Your chatter spoke a language I couldn’t understand, but I knew you were making us aware of your presence as you jumped off the trail. Then, several more of you appeared, just before the point where nature showed us her true majesty. 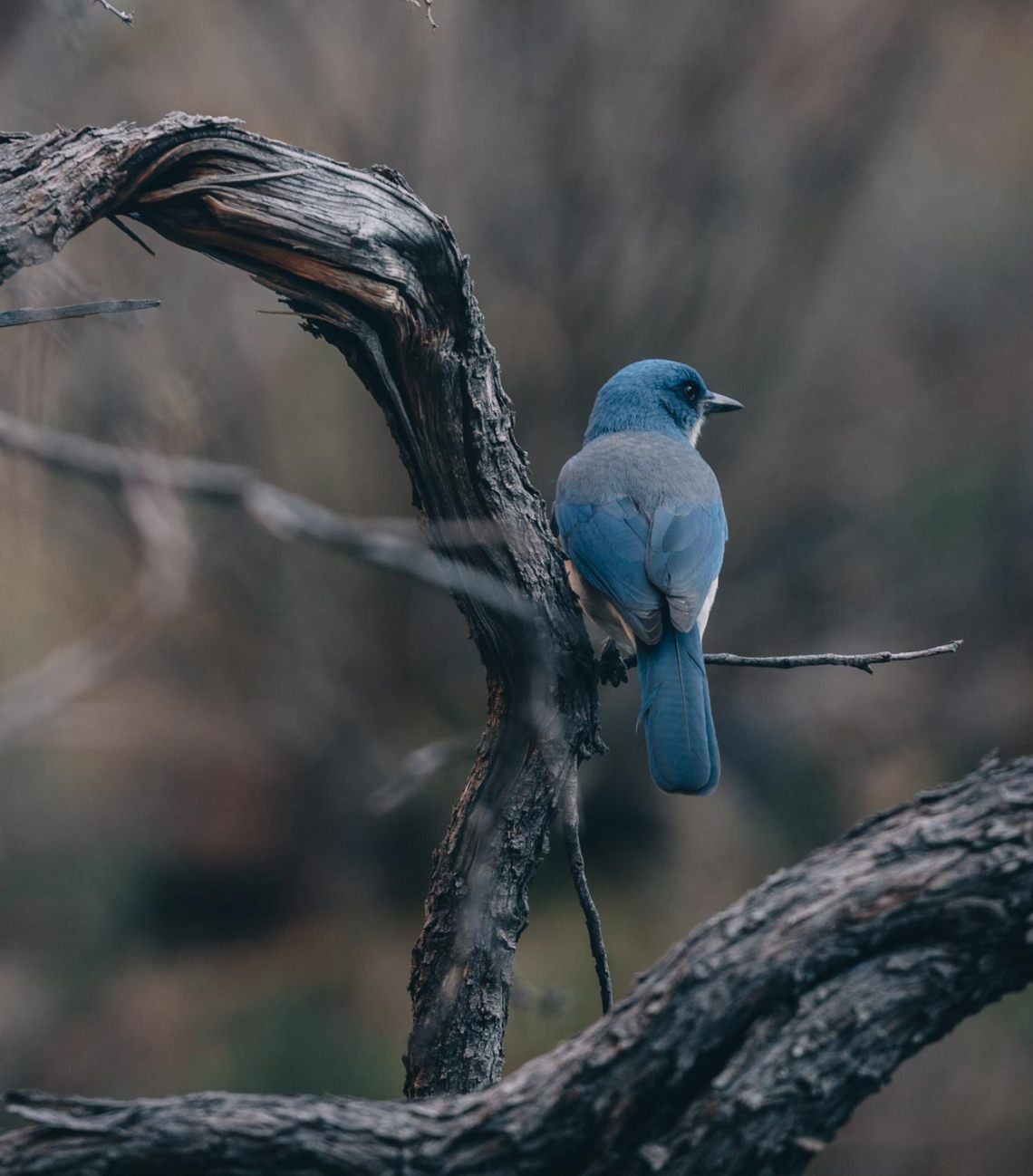 Yes, you were guarding the best part of the trail, you and your friends.

Five or six of you watched closely as I wandered on. I know this because every time I turned around, you were there, watching me. Yet every time Andres stepped forward to capture your image, you and your friends backed away.

So we trekked on through a fascinating corridor of stone formations. It seemed every surface bore the lines of an ancient creation; endless lines carved patterns too complex for us simple ones to comprehend, and I didn’t want to comprehend. 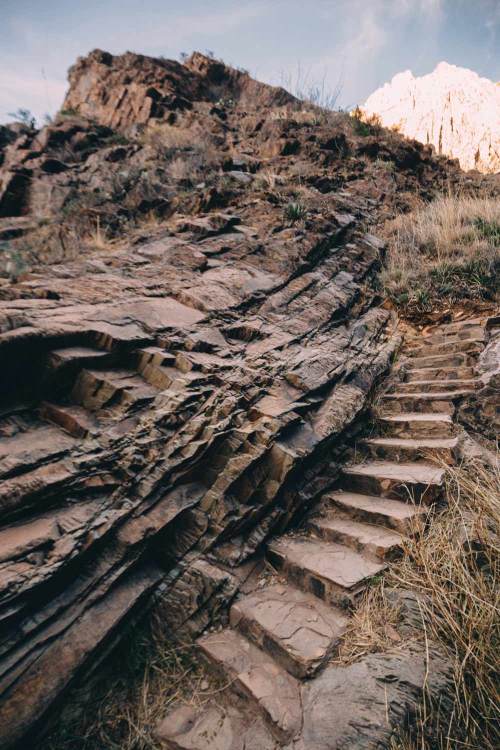 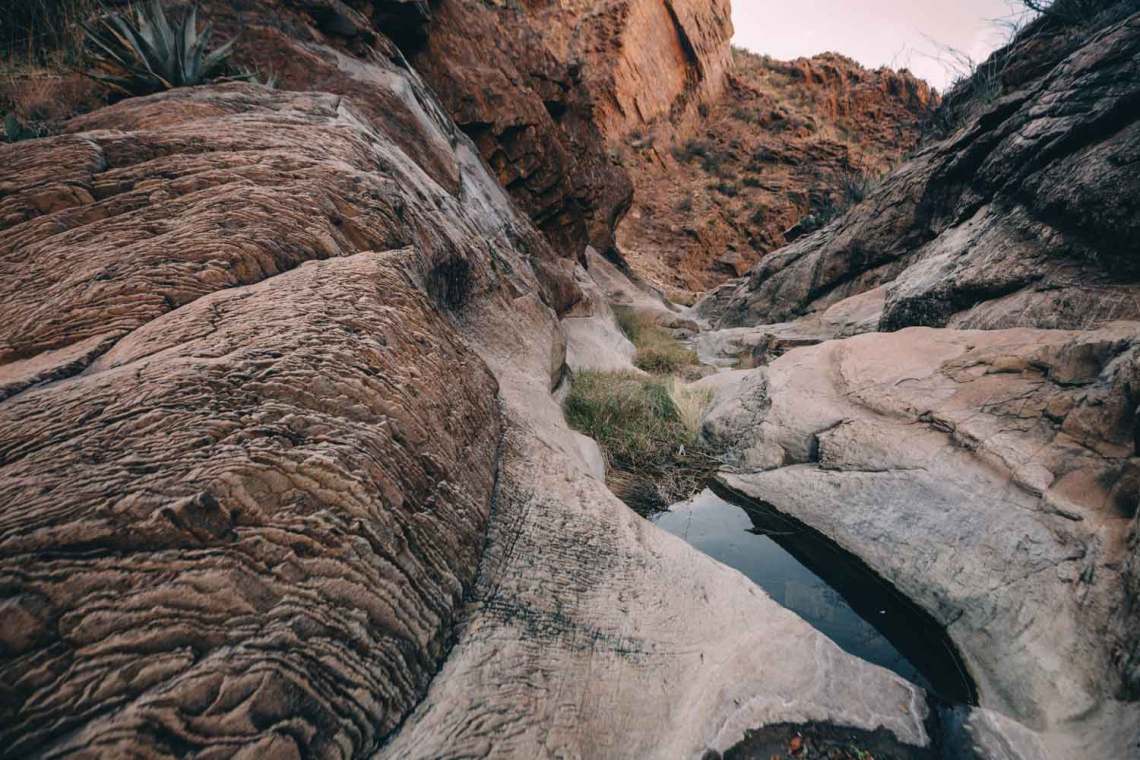 I wandered through letting the magic capture my imagination, and my logic floated out the window – no pun intended. Because mere moments later I was at that window, standing there in complete awe.

How did this form, why is it so waxy, and what’s down there?

I let those questions go as we took it all in. A step too close and I would find out what’s down there, so instead I took a seat and thought for a little while. 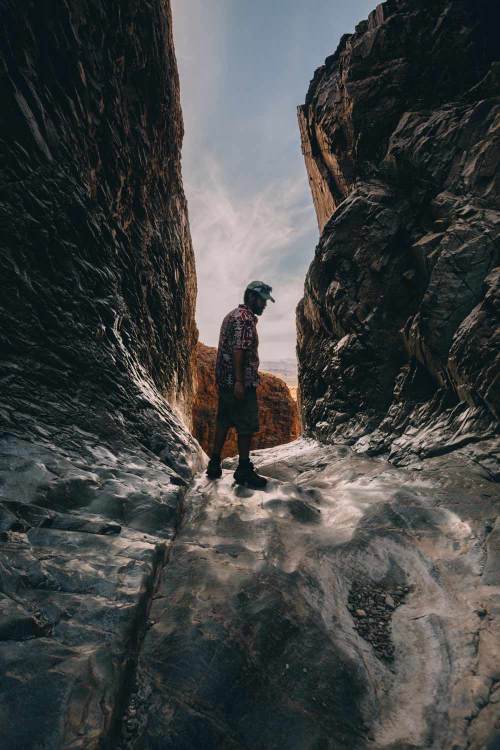 On the hike back you were gone, little blue jay. At least you tried to trick us by hiding, but I know you were really there. You and your friends, watching from a safe distance.

2. A Crow at the top of Lost Mine Trail 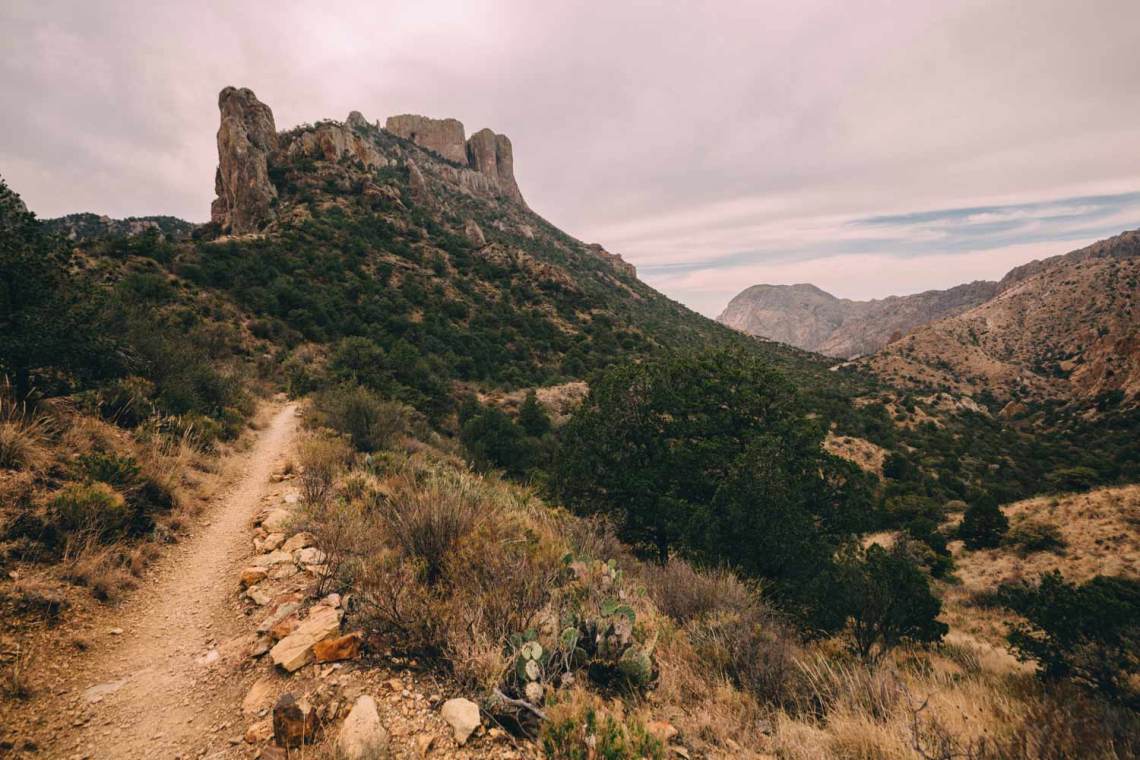 “You’ve still got about 75% to go,” a fellow hiker warned us as we passed him just as the Lost Mine Trail began an endless series of switchbacks. Up, and up, and up. There really aren’t very many switchbacks, but it can seem so when time is not on your side. We were hoping to make the short 4.7 mile roundtrip hike before dark, and already the sun sat low in the hazy mountainous horizon of Chisos Basin.

But those who love vistas and observing strange looking plants have no sense of time, especially when camera and sketch book are in hand.

Still we made it to the top and discovered a beautiful gift at the end.

A stunning view, yes, but for me the reward was a giant crow who descended on a tree. He and his friend flew circles in the air, made strange clicking sounds at each other, and cawed as crows typically do. 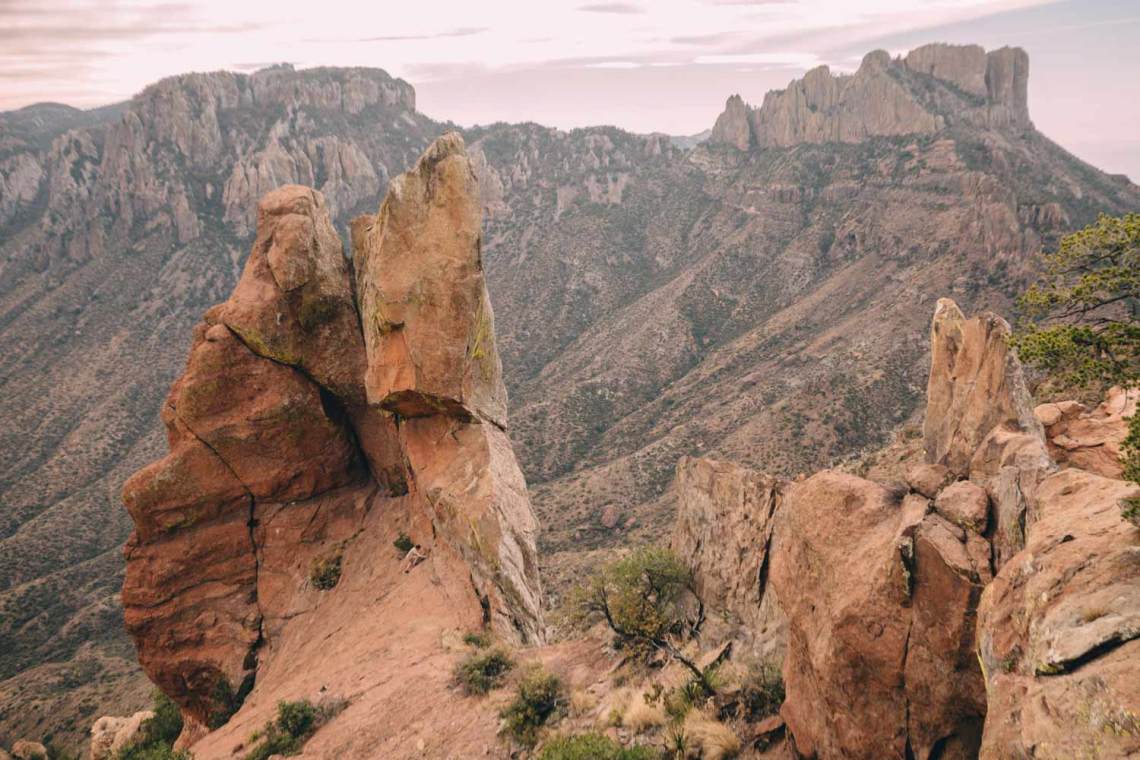 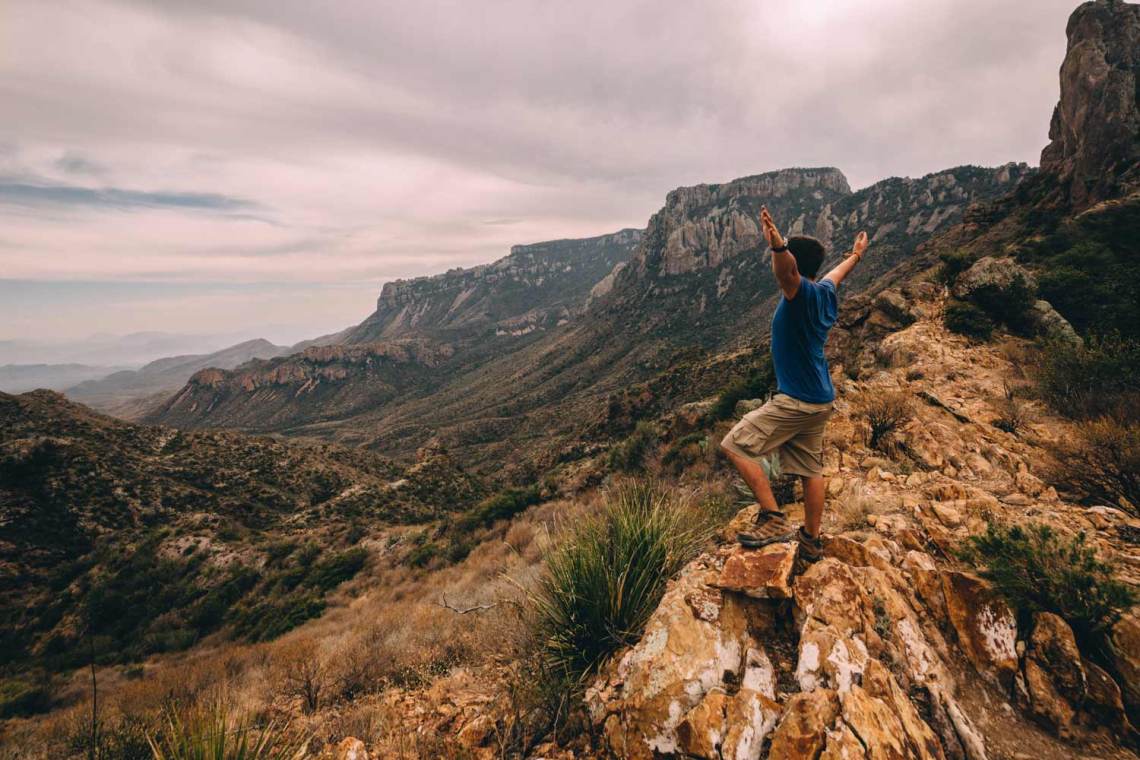 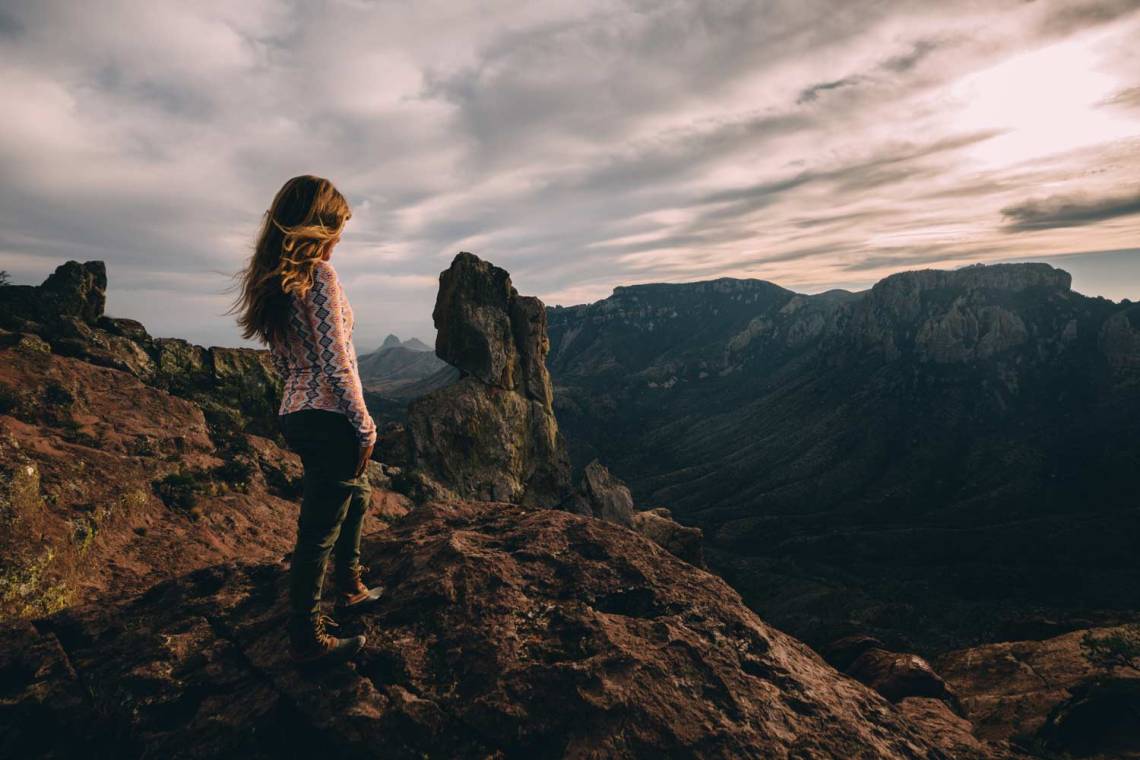 The Lost Mine Trail fit together like a scene from an epic novel. The stone sculptures, the rolling vista of great heights, the twisted trees, the setting sun, the wind, and the crows.

I stood a safe distance from the tree and listened closely, feeling in that moment grateful for this trail. That’s one of the many reasons people need parks, for moments like these.

And yes, we made it back before dark, just in time to catch the fiery sunset around Casa Grande. 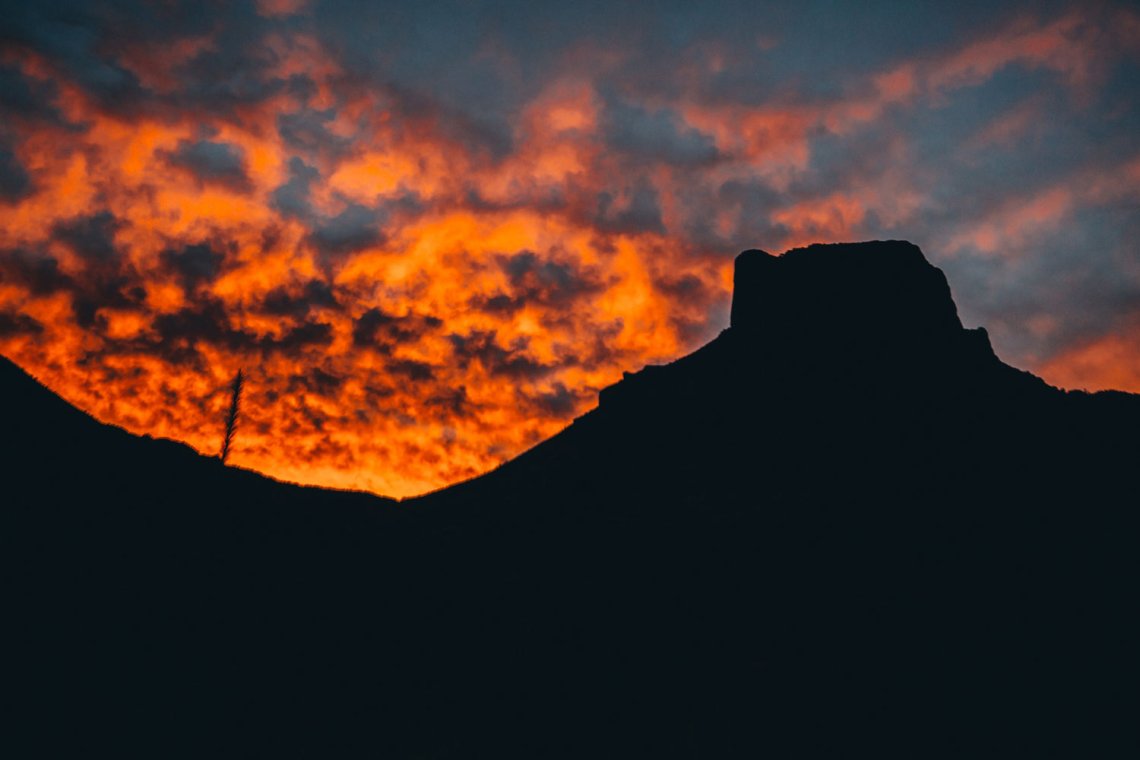 3. An Unknown Bird Dancing on the Border in Santa Elena Canyon

This encounter was the most mysterious of all. It is still a mystery, and I hope someone can shed light on the action I can’t understand.

Santa Elena is the most impressive of formations in Big Bend with massive walls rising up around the Rio Grande River like guardians from a time long gone. In fact, time is again the secret ingredient in this wonder. 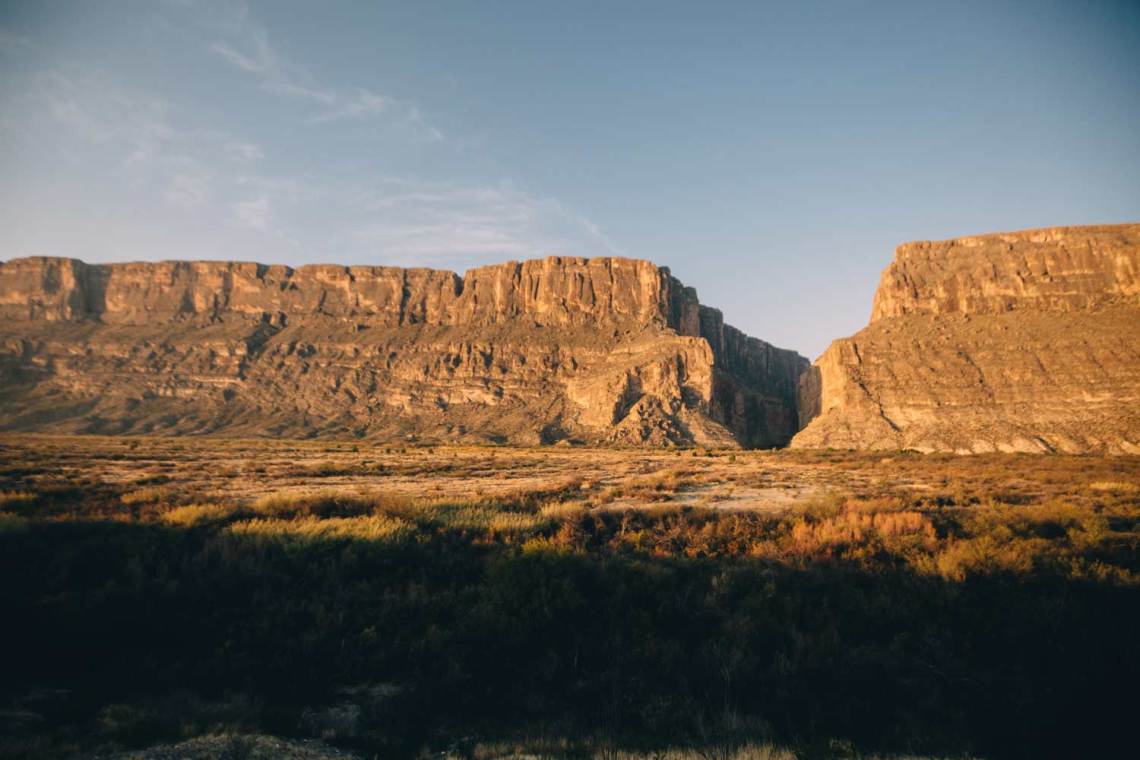 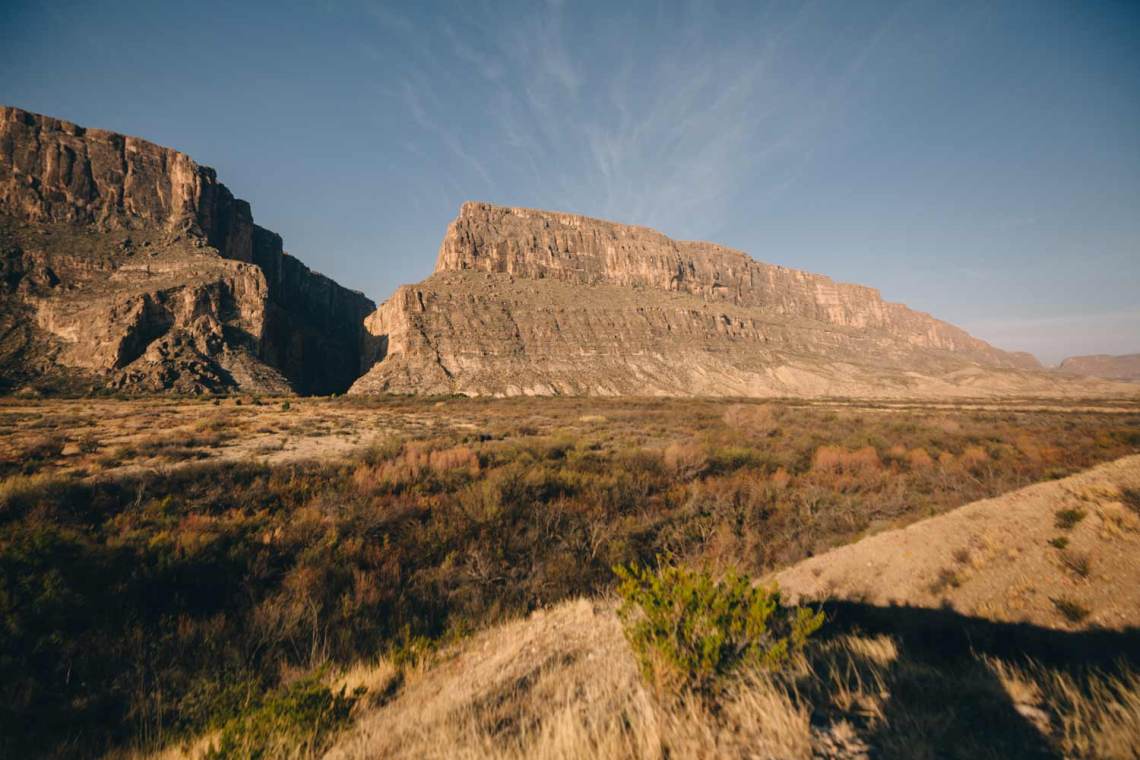 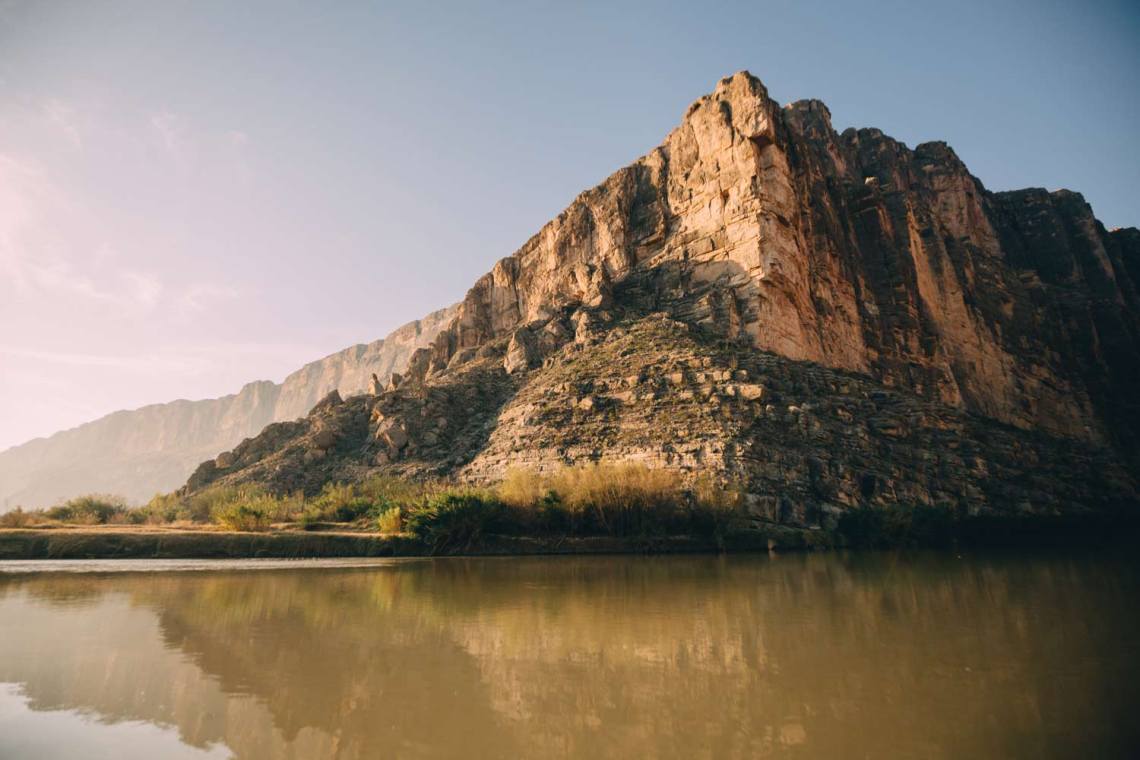 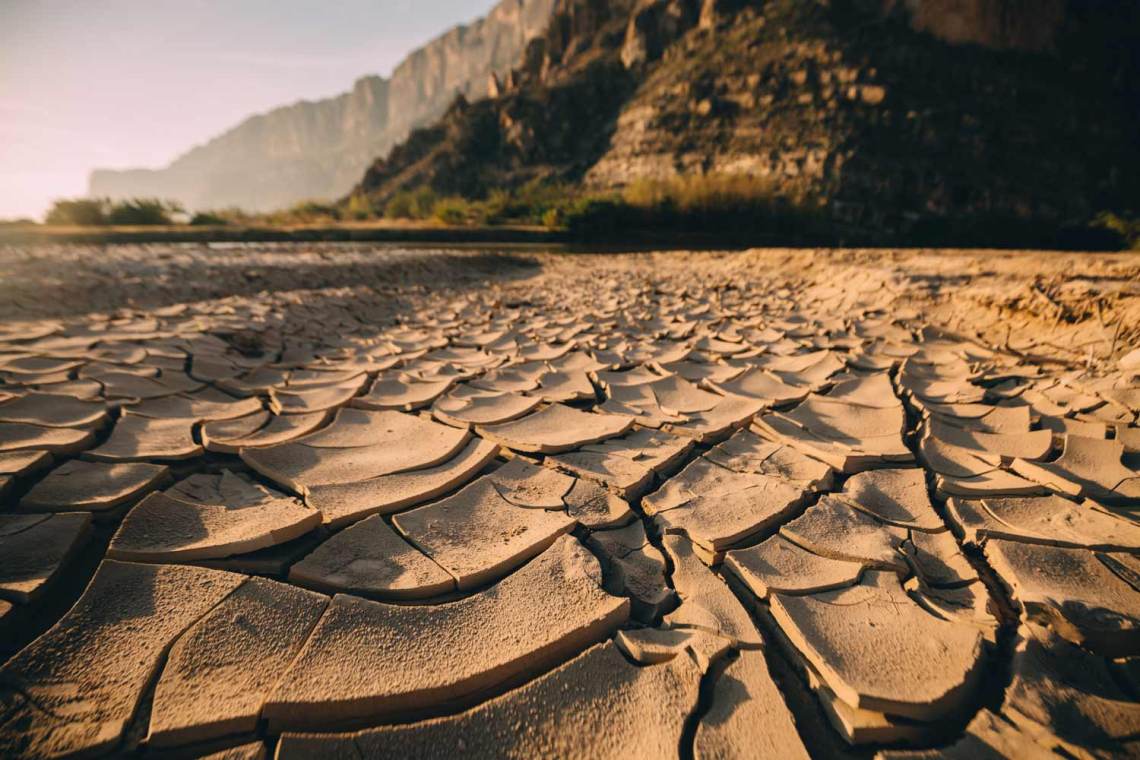 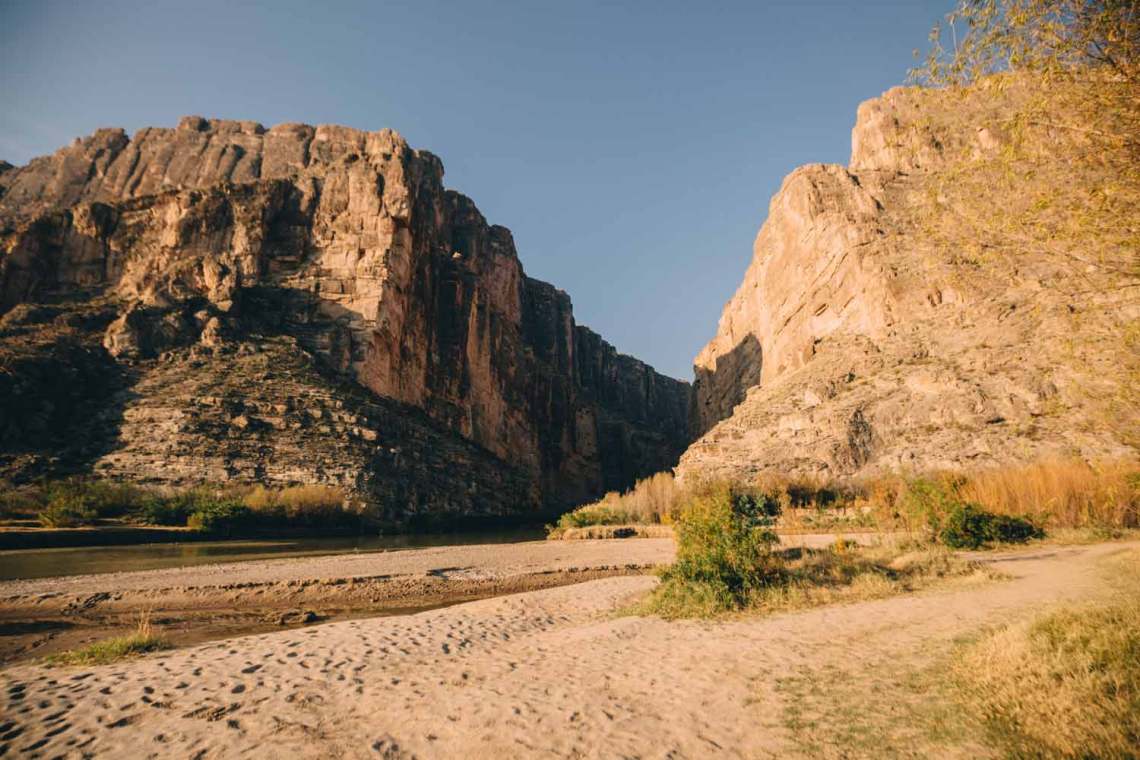 How can such a gentle force carve through such cold stone? Time, that is the answer. Anything is possible with time and a little persistence.

We could learn something from that, don’t you think?

As dawn shed light onto our cold shoulders, I couldn’t help but think of William Wordsworth words:

Come forth into the light of things, let nature be your teacher. 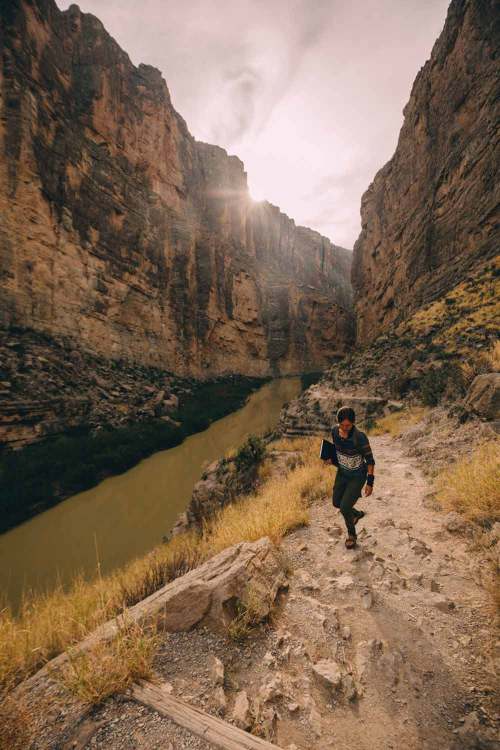 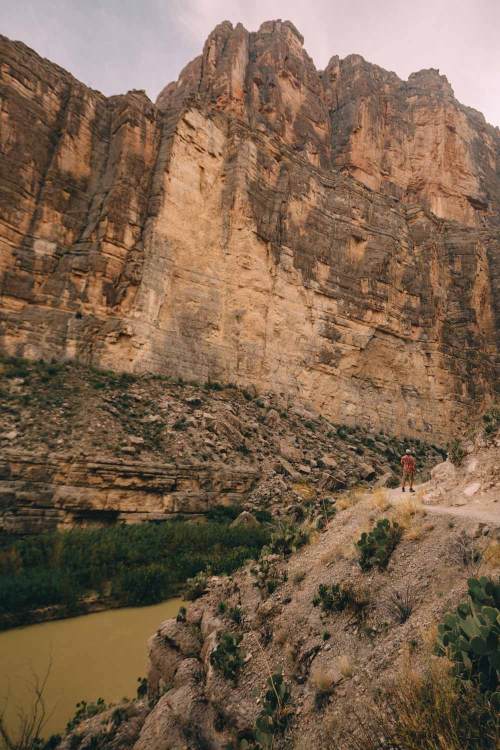 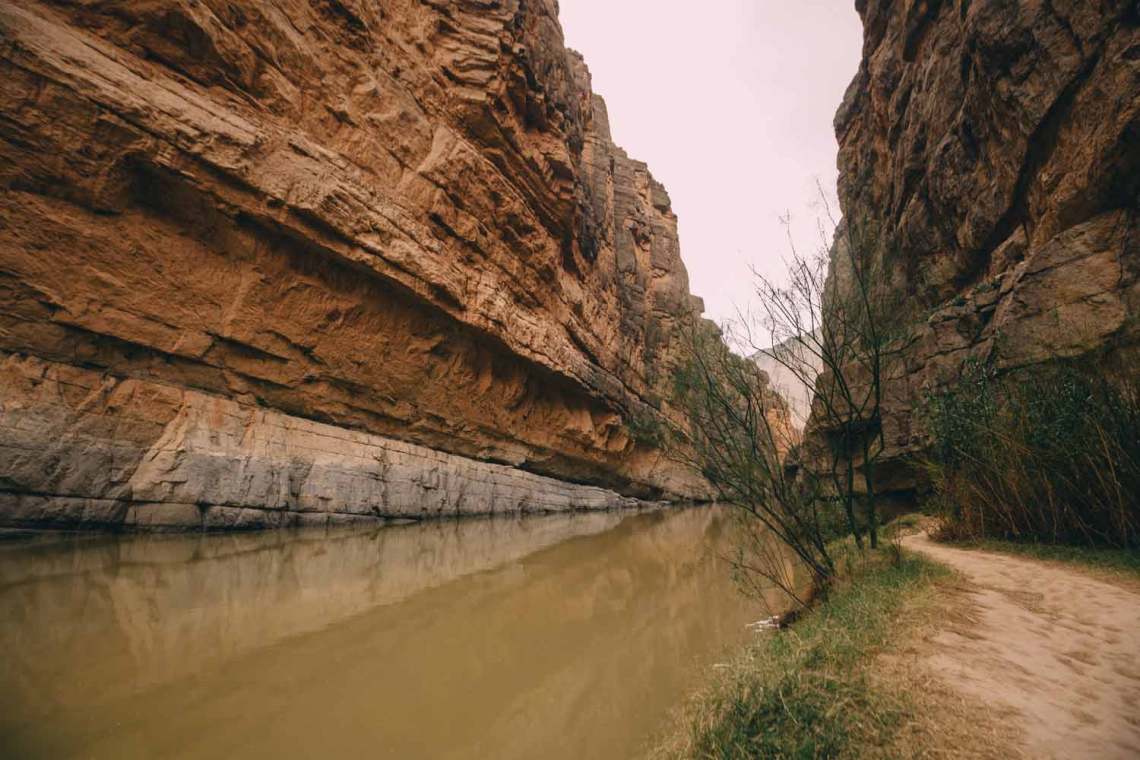 Nature has yet to teach me a lesson about the bird in this canyon.

We found her at the end of the trail on a second afternoon hike, a small black bird sitting on an island of small rocks in the middle of the river.

She flew up into the air, only to fly back to the rocks. This happened again, and again, and again. She seemed to fly from her perch so confidently, only to turn sharply around a few seconds later and dart back to her island.

“What are you doing, little bird?” I asked. She did not answer.

We thought, maybe she isn’t crossing to the land because we are scaring her.

So we backed far away and watched from a distance. Her behavior continued.

Then I thought, maybe she is injured and cannot fly far.

But then I thought, maybe she is a Mexican bird and fears crossing the border. After all, she was sitting right on the border. It typically falls in the middle of the river, or in the deepest part of the channel.

An indecisive bird about to make a big choice.

We never did find out, deciding to hike back out of the canyon. 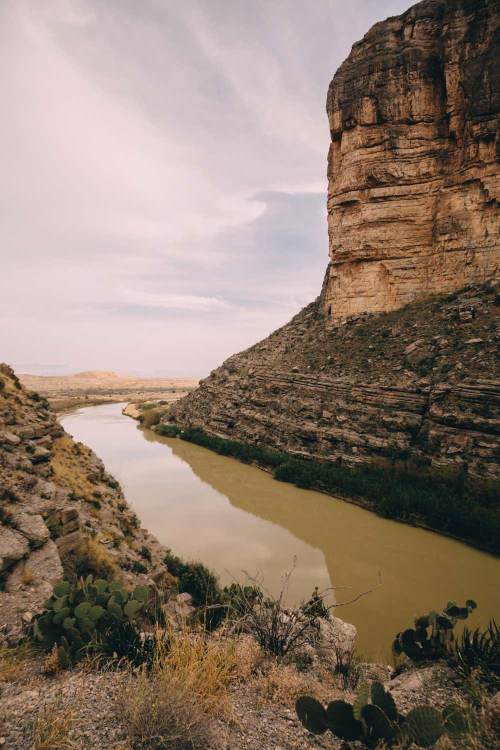 Nature is our teacher, and our inspiration.

Thank the stars she mystifies us still. Because what is life without a little bit of mystery to inspire us? 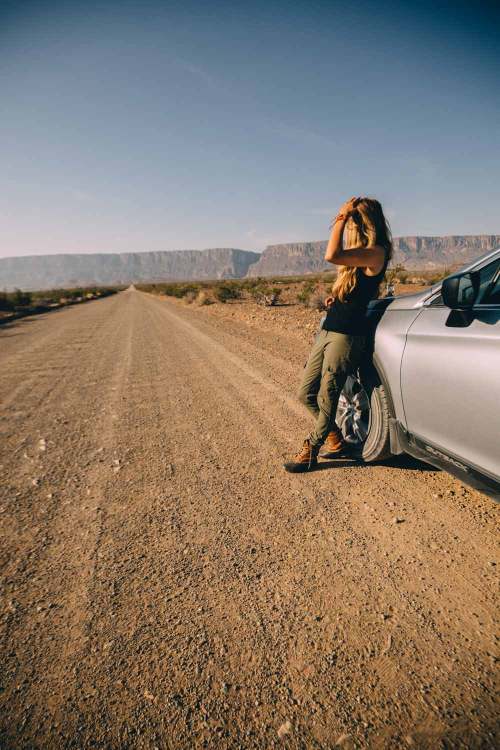