The memory across Texas is a blur. Somehow we made it to Big Bend National Park after an endless road through Houston, then San Antonio, then Del Rio and onward.

Not long after Del Rio the road crossed a reservoir, half of which lies in Mexico.

Here we took a break to explore.

An old trail led to a couple of worn picnic tables overlooking the bridge and unusually green water. It was eerily quiet, save for the rumble of a semi every few minutes and the croak of a vulture hovering nearby. I did say we were in Texas, right? 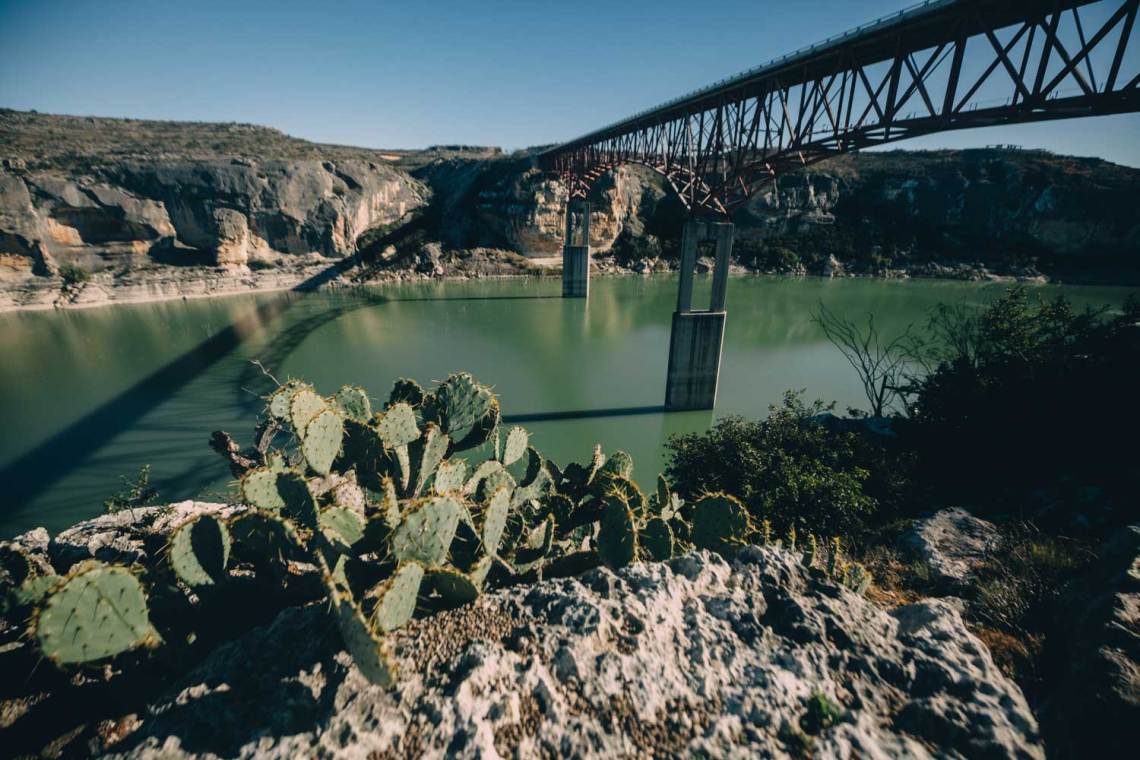 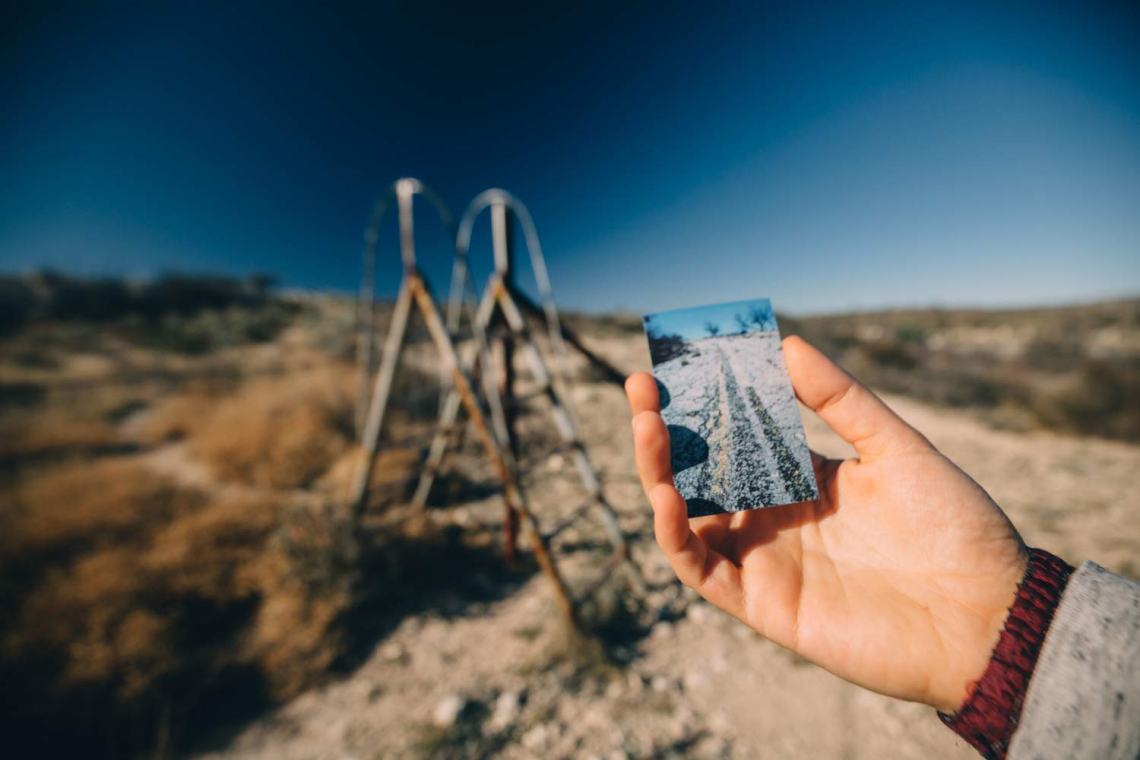 The road north is broken, but we were headed into the wild west

At one point the trail crossed an old fence, and here I took a snapshot of an even older abandoned road leading north. I call it “The Road North is Broken.” I was happy to continue on west, urging us back into the car so we could make it into Big Bend before nightfall.

We crossed into the park right at sunset, and even after the first few miles we knew something grand awaited us. The sun set like white gold fire, transforming the landscape into a new kaleidoscope of colors every few seconds. As the light changed, so did our vista, and it seemed I couldn’t blink twice before a new scene appeared. Shadows of distant mountains lengthened, and new washes of color filled the clear sky. 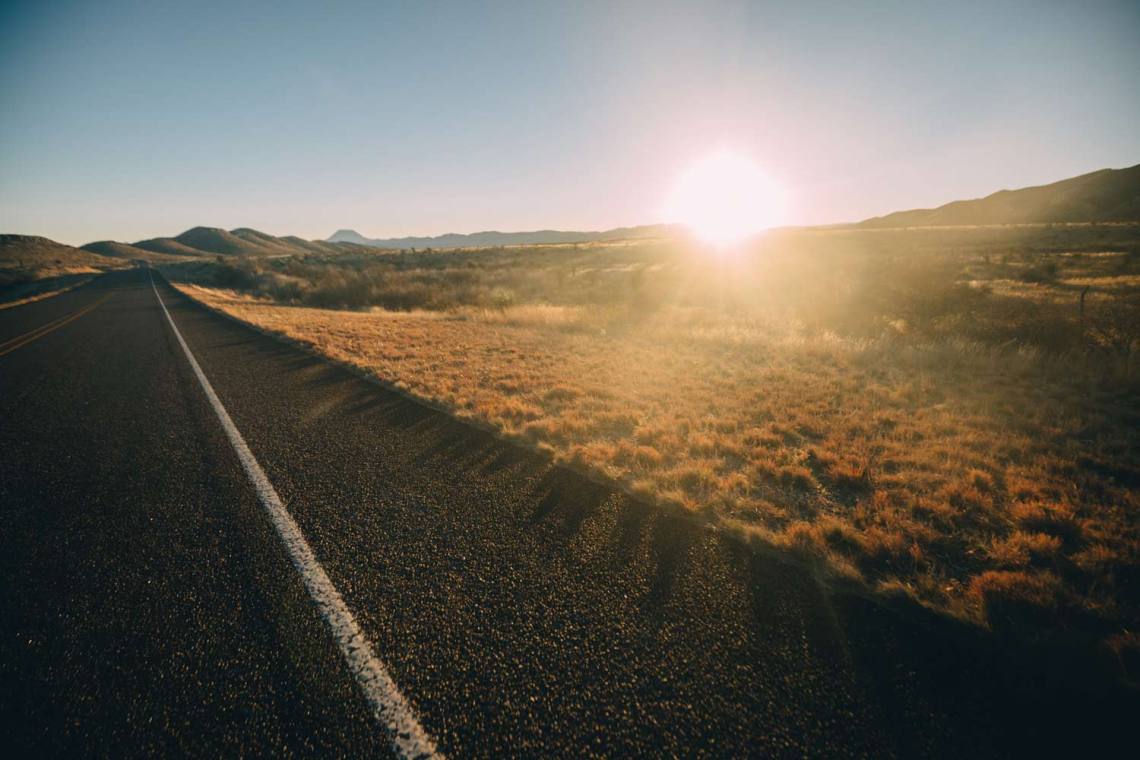 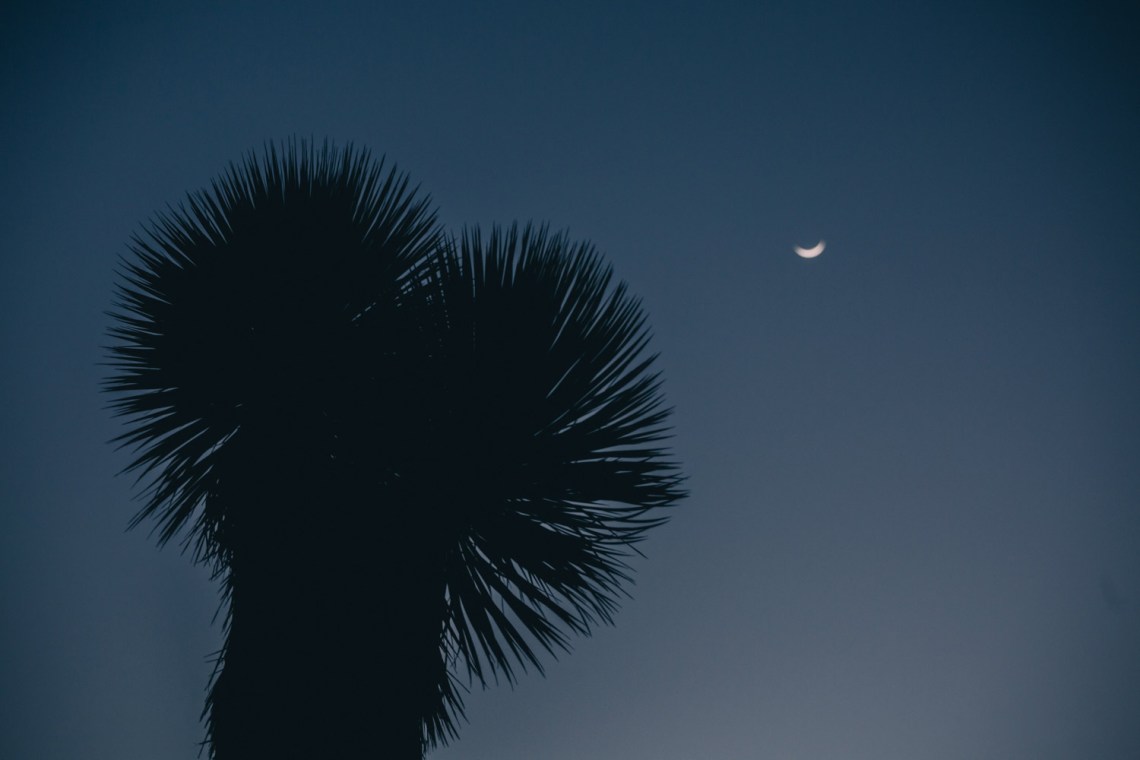 We Arrived to Chisos Basin in the Dark, Awoke to a Surprise

Finally our luck ran out and day turned to night, still many miles before our arrival into Chisos Basin. Did I mention how endless these roads feel? In the last waning moments of day we saw a sliver of the moon appear over desert plants, silhouetted against the sky. Then, darkness sprinkled though with a thousand glittering stars. I lost my breath.

Weariness overtook us as we found quite possibly the last campsite in Chisos Basin, and there we slept the sleep of those who spent too many hours in a car.

We awoke in the middle of a crown – or so it seemed – all around us rugged peaks reached into a flawless blue. And there shielding the sun was Casa Grande, the greatest surprise of them all. It never fails to awe me, standing beneath mountains, the feeling of how tiny we are. 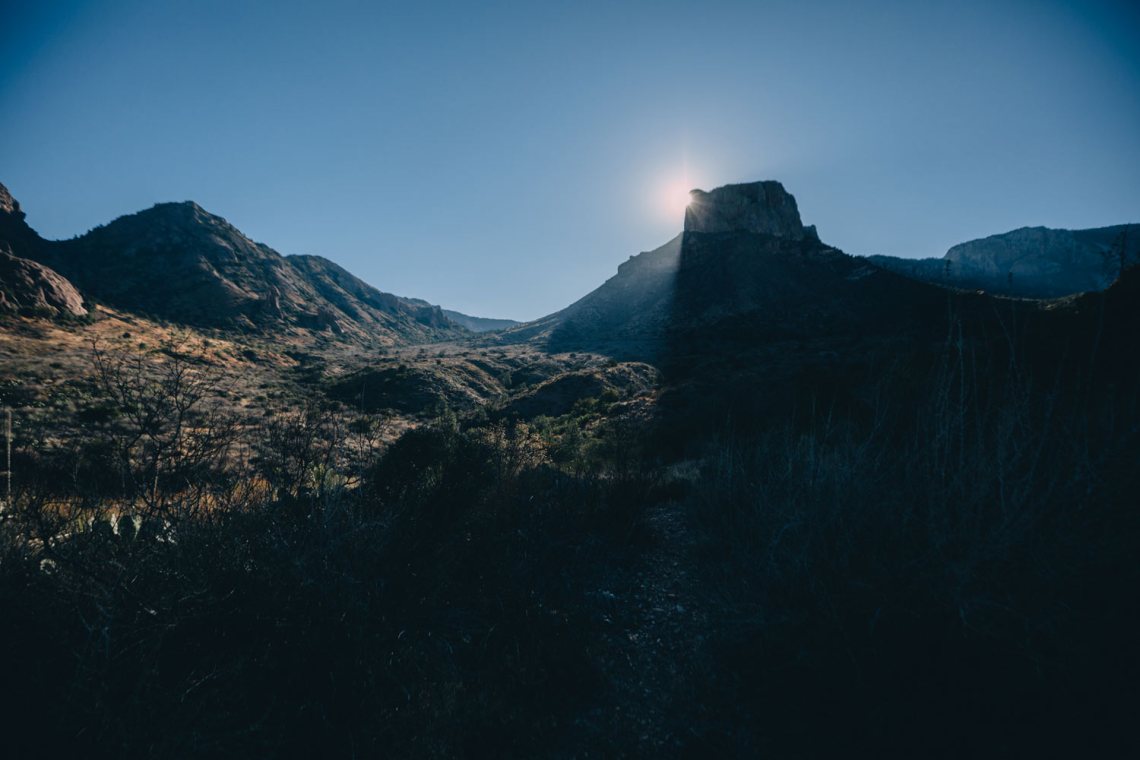 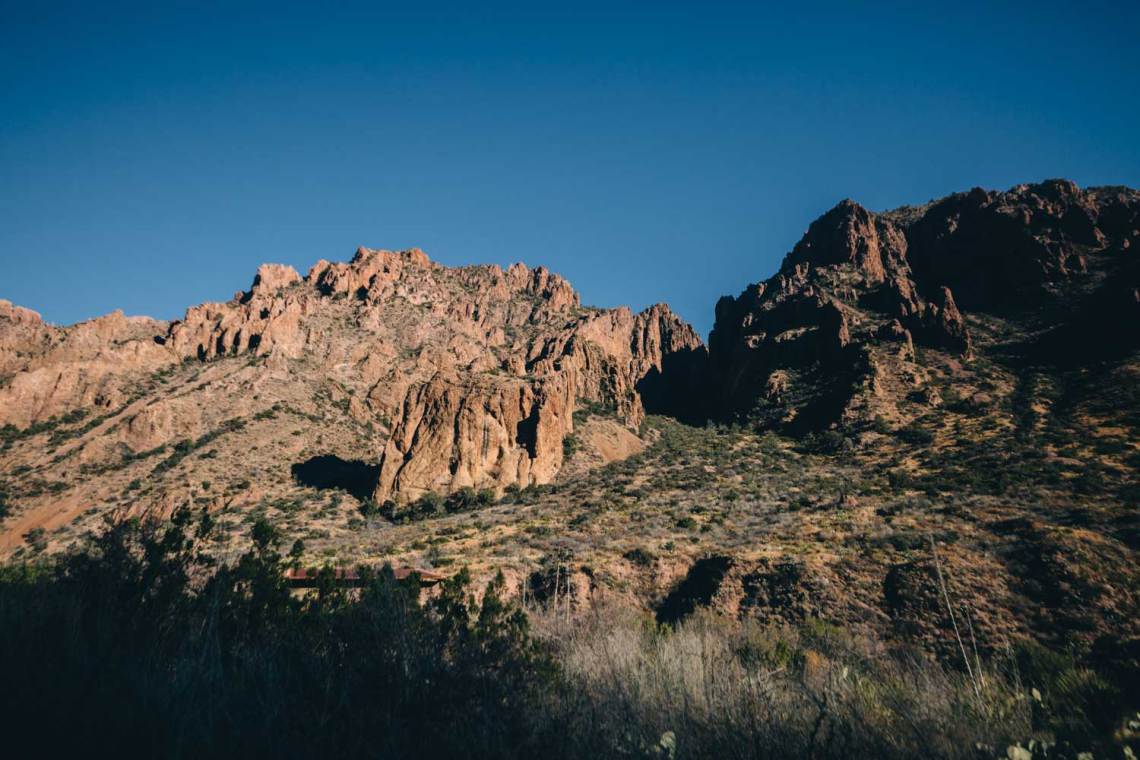 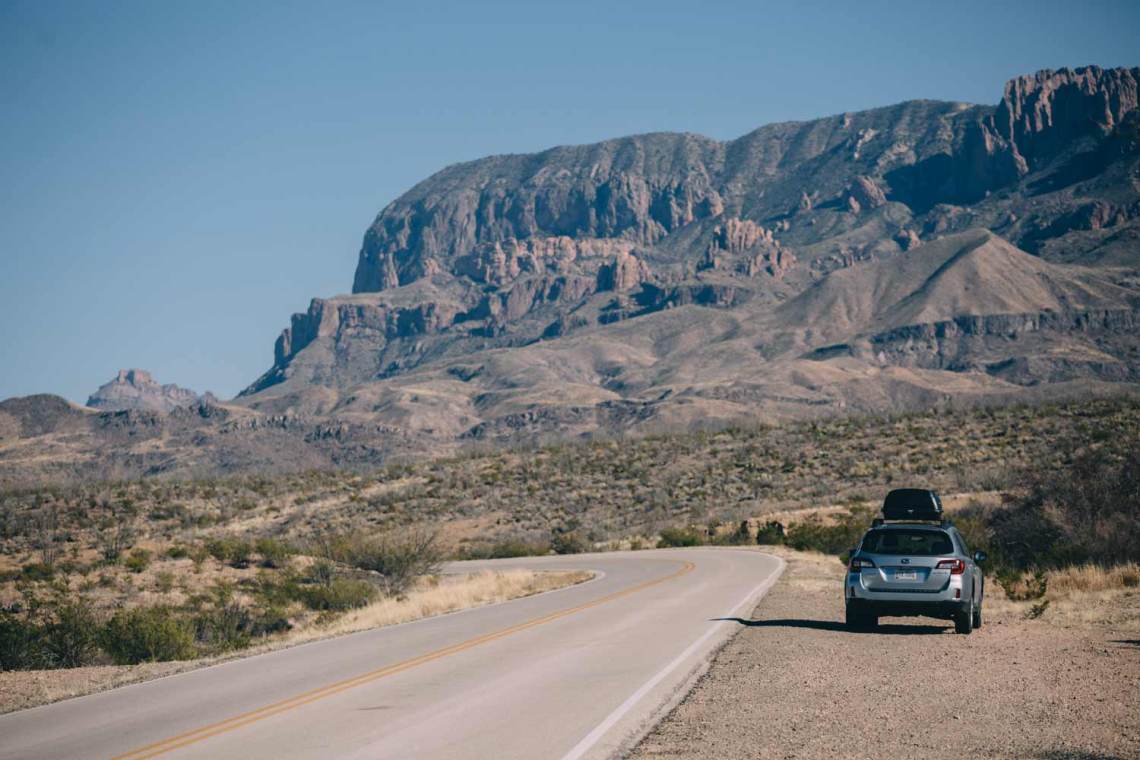 Stone Fortresses Guarded by the elements, cactus and wildlife

Later we descended from Chisos Basin, which is like an island of peaks in a rough desert landscape. It became clear to me what this park is all about: stone fortresses of the most natural kind, like ancient kingdoms spread across to guard a rich land.

Those who guard this place are the winds and an unforgiving sun, among less powerful forces like mountain lions, rattlesnakes and prickly pear. Even tarantulas dwell here among many other wildlife who call this land home. 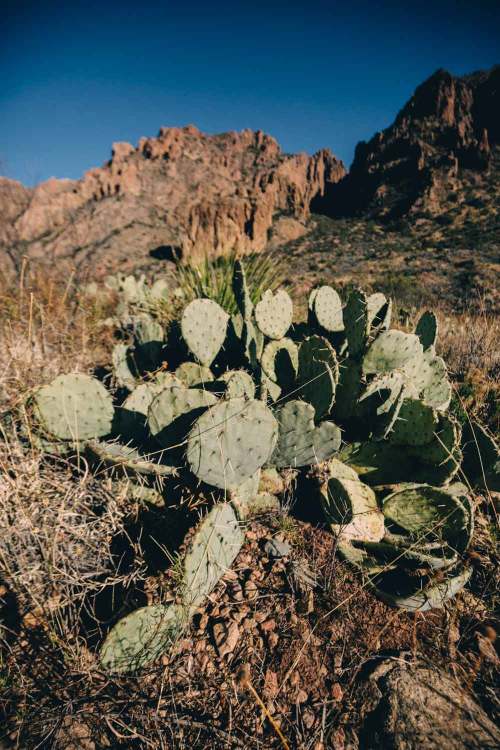 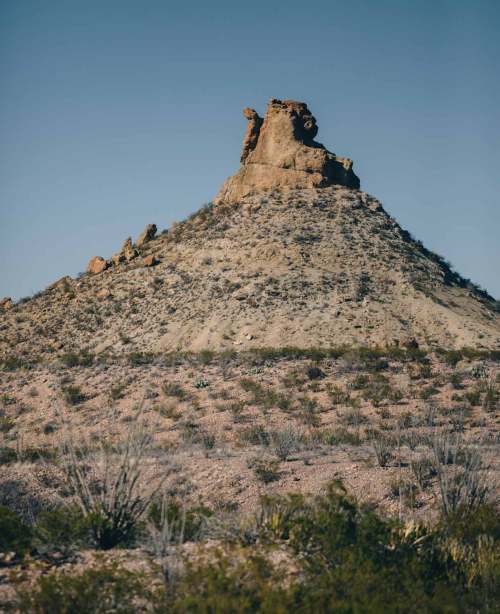 The Nearness of Another Country, yet the Land is the Same

(Later we discovered a legal crossing only a few miles from this point. Big Bend collaborates with Mexico to conduct scientific research, on the other side, which is also a park. It’s easy for park visitors to cross as long as you have your passport). 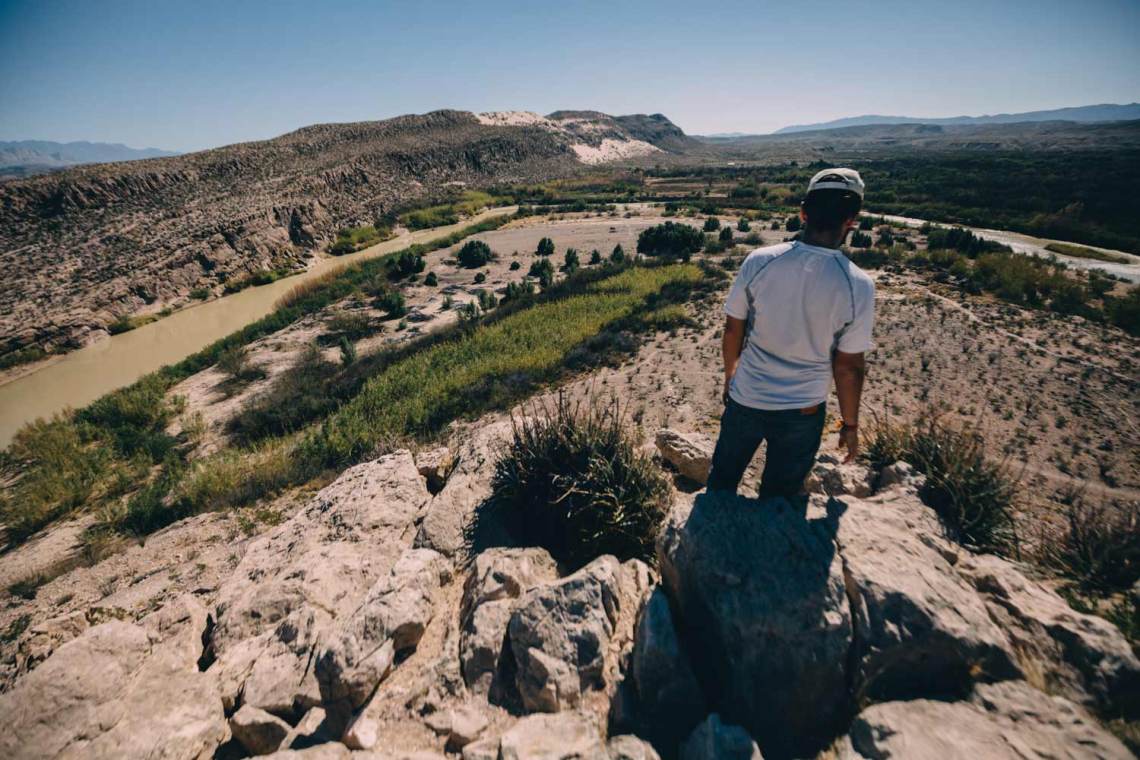 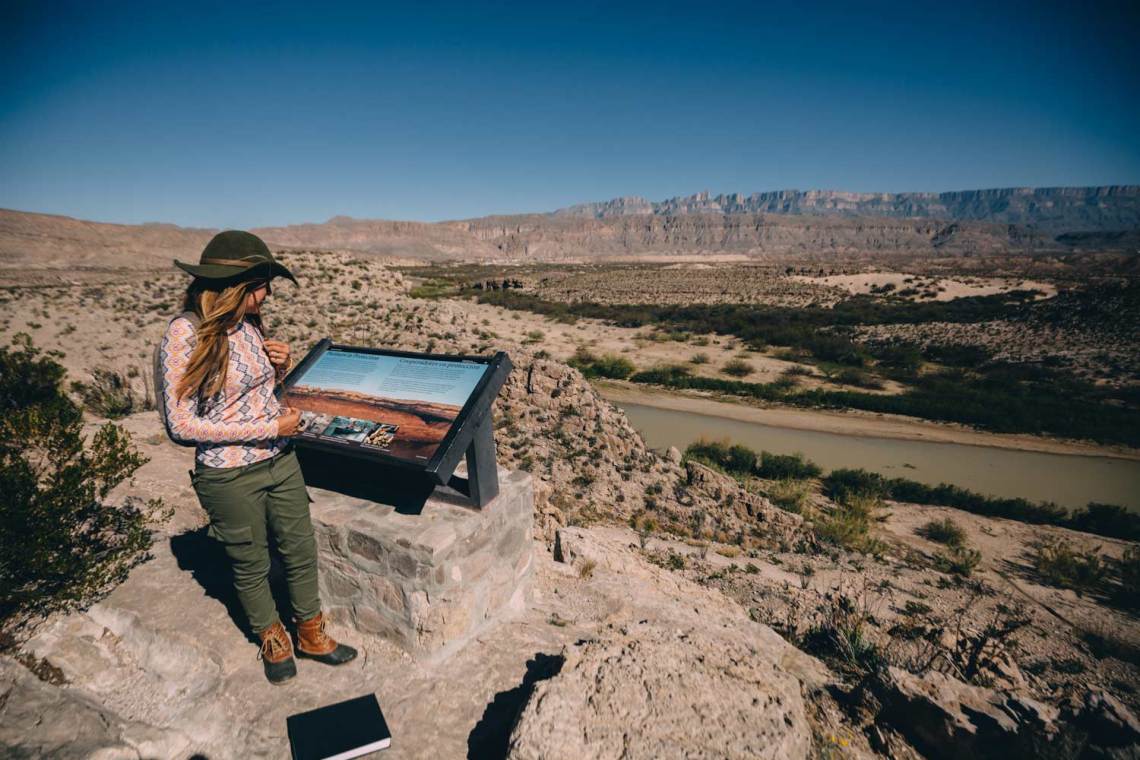 From the Rio Grand to Boquillas Canyon to the Hot Spring

The remainder of our first day exploring took us into the chiseled Boquillas Canyon (5) where we lowered our fingers into the Rio Grande and came across some peculiar artworks (6). Apparently Mexicans cross the river and leave their artisanal wares for tourists to purchase under an honor system. It’s not hard to see the legal issues here (i.e. it’s illegal), but I still found the randomly placed sculptures charming. Somehow, it added even more magic to this place.

But the most rewarding first impression of them all was a dip into the natural hot spring right along the river (7). I have few words to share about this experience, and even less photos as we were busy soaking, but let me just say it was divine and most unexpected. 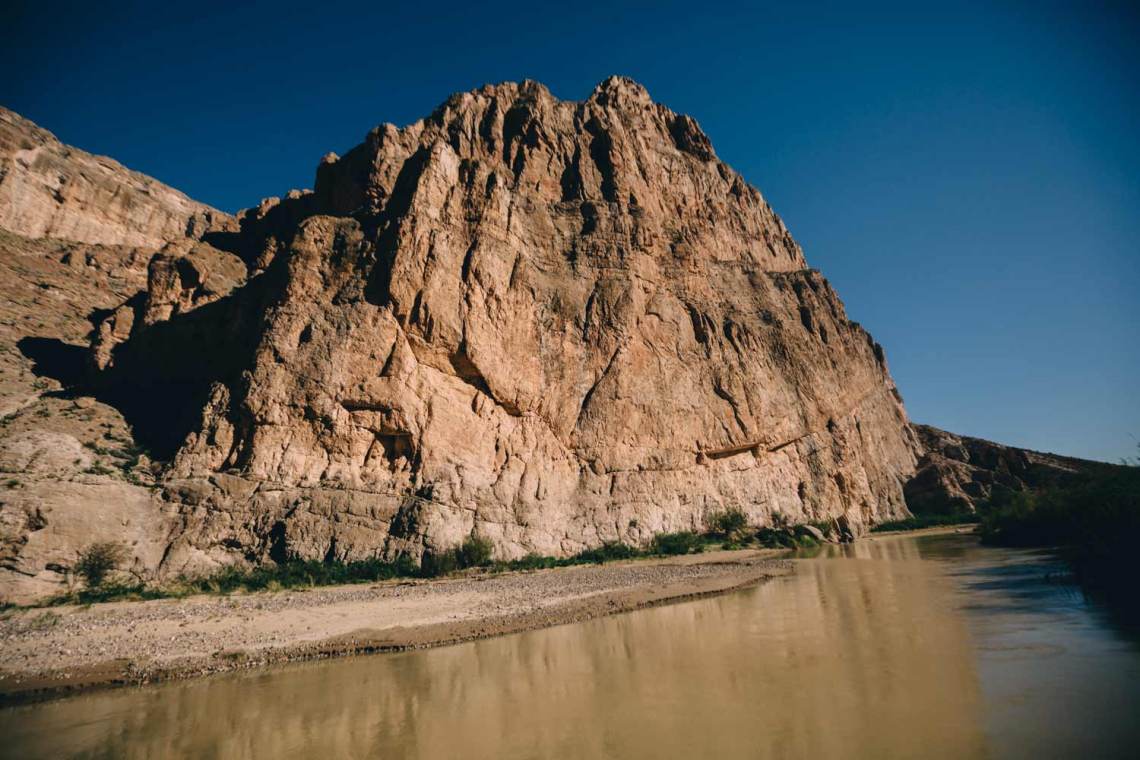 First Impressions began and ended with a sunset.

Day One came to a close as we made our way back to Chisos Basin. It seemed every color of the rainbow would grace us with their presence again, and I closed my journal with words similar from the very beginning, only I changed the actual color of the sun.

I realized everything we discovered that day was only the beginning… the best was yet to come.

The sun set like a globe of orange fire, transforming the landscape into a new kaleidoscope of colors every few seconds. 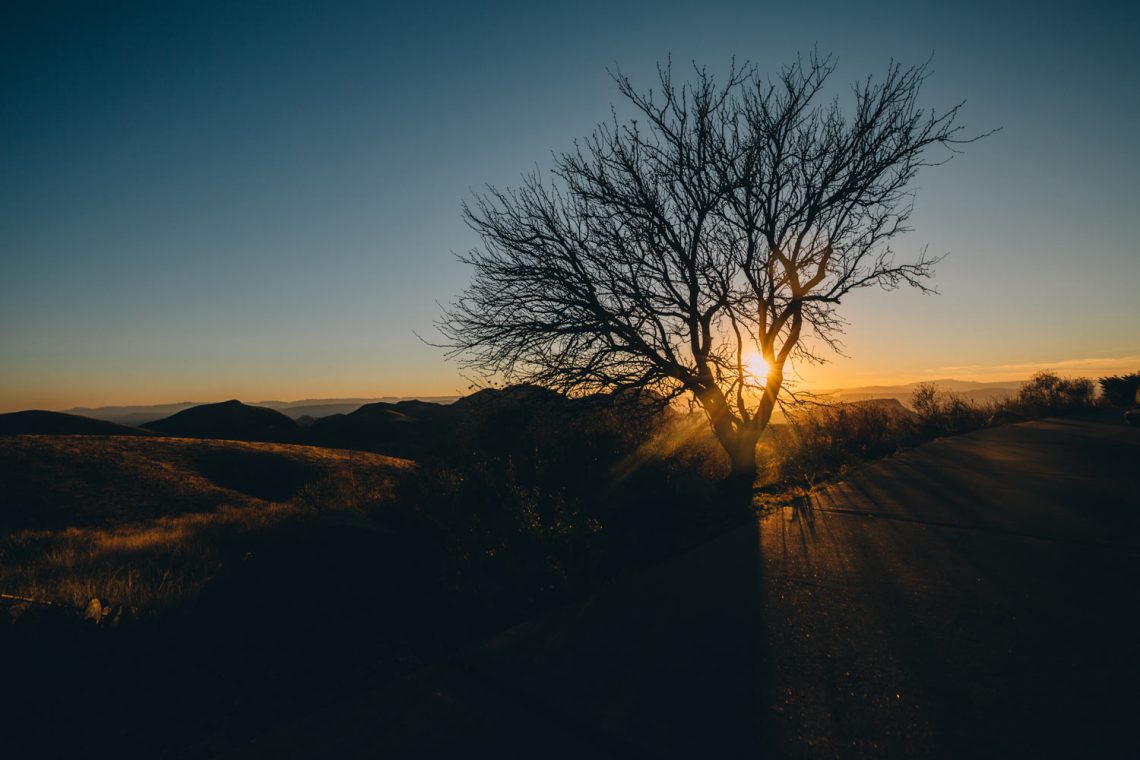 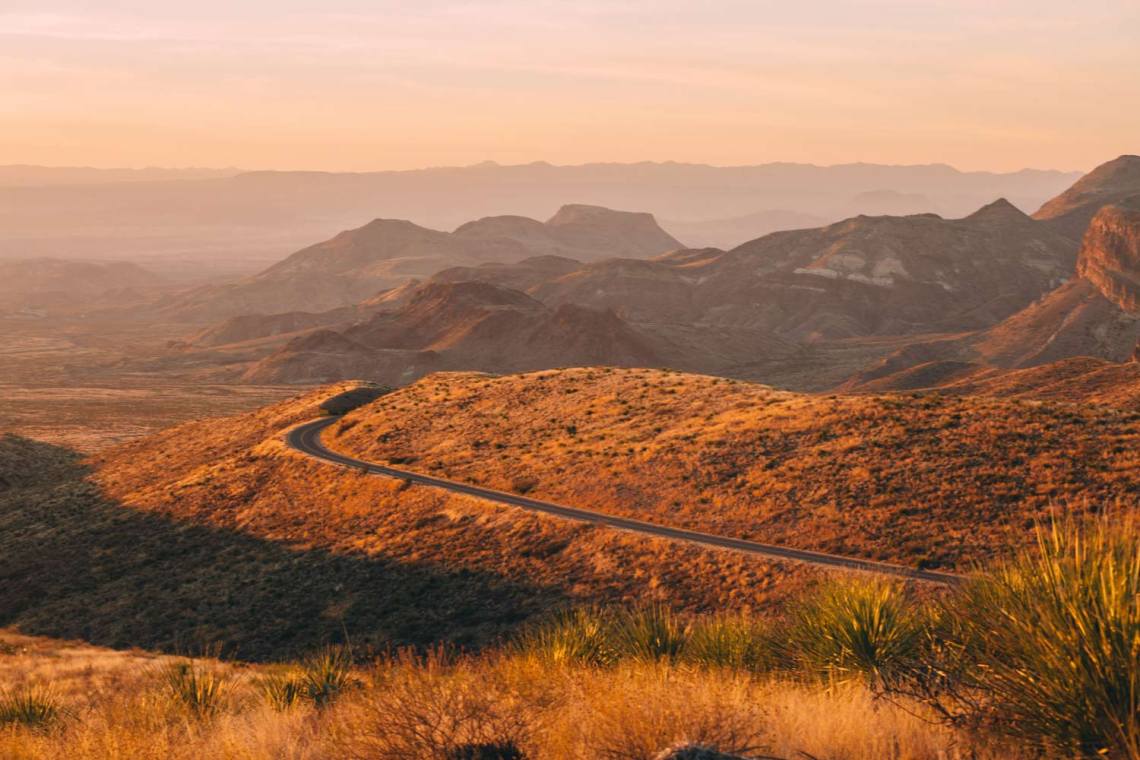 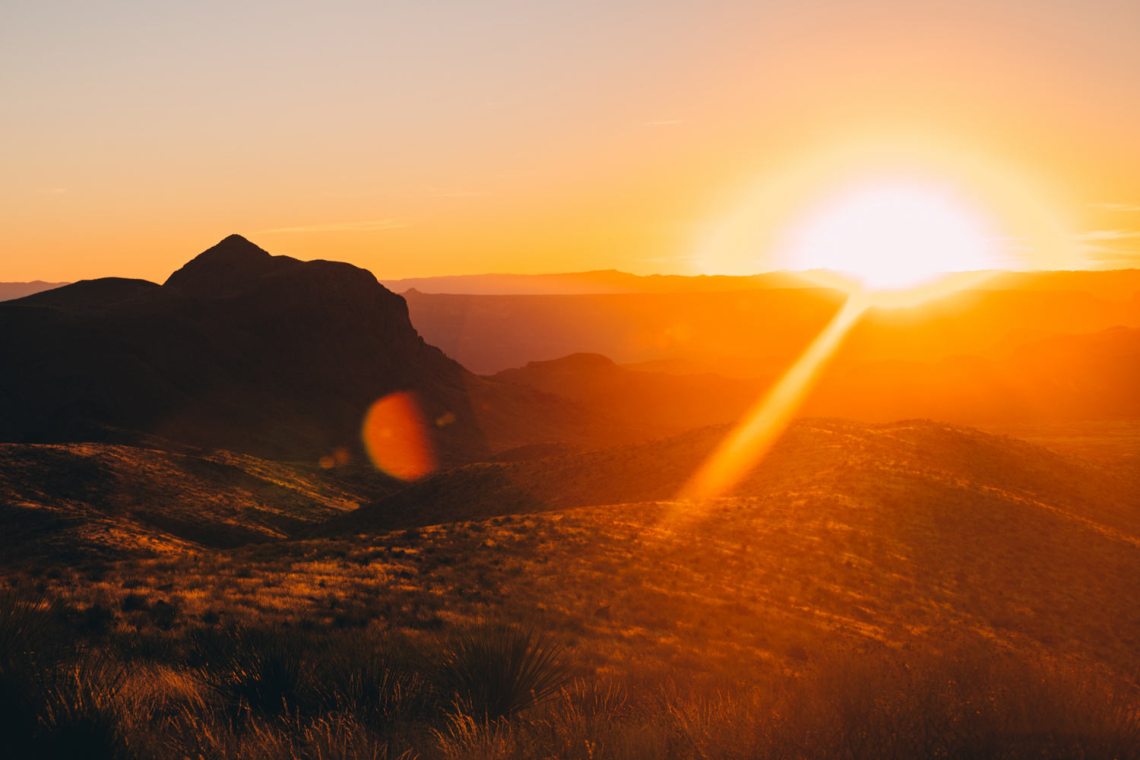